Eigg; the jewel in the Hebridean crown

Known as the jewel in the Hebridean crown, for its’ beauty and natural heritage, geology and archaeology.   Picts and Vikings left their mark, the island’s rich history is steeped in clan warfare and the crofting way of life. Explore beaches, walk or climb and see Eigg and its’island neighbours from different vantage points.  Let a Scottish wildlife warden guide you and share some of the island’s wild secrets during the weekly Scottish wildlife walks, or just spend time with the locals on Eigg. The Isle of Eigg Heritage Trust is the community organisation which owns the Isle of Eigg.  The trust manages and stewards the island’s development for current and future residents.  After years of instability, neglect and lack of secure tenure, the Isle of Eigg Heritage Trust was able to purchase the island on 12th June 1997, largely due to the generosity of around ten thousand members of the general public. The Trust has three members, The Isle of Eigg Residents’ Association, The Highland Council and The Scottish Wildlife Trust.  Each of these members appoints directors to the board of the Trust.  The Isle of Eigg Residents’ Association has four directors who are elected by the community.   The Highland Council and The Scottish Wildlife Trust appoint one director each.  The trust has an independent chairperson.  The main board holds quarterly meetings, whilst the day to day management is devolved to island directors, who meet on a monthly basis.  The Trust is supported by a part-time employed Secretary. Many of Eigg’s place names are in Gaelic. For example: Eilean Eige: The “island of the notch”; Eag (genitive Eige) is an old Norse word meaning notch or wedge.  It refers to the distinctive shape of the Sgurr on the skyline. An Sgùrr: “The Sharp Peak”. The distinctive shape of the Sgurr has given prominence in Gaelic, making it “the” sharp peak by excellence. Galmisdale: Valley of the Roaring Surf, from the Old Norse Galmr (roaring surf) and Dalr (valley). Beinn Bhuidhe: Yellow mountain: take its name from the bent grass turning yellow in the autumn, Bealach Clithe: The steep pass, referring to the steep descent into Cuagach and Cleadale. 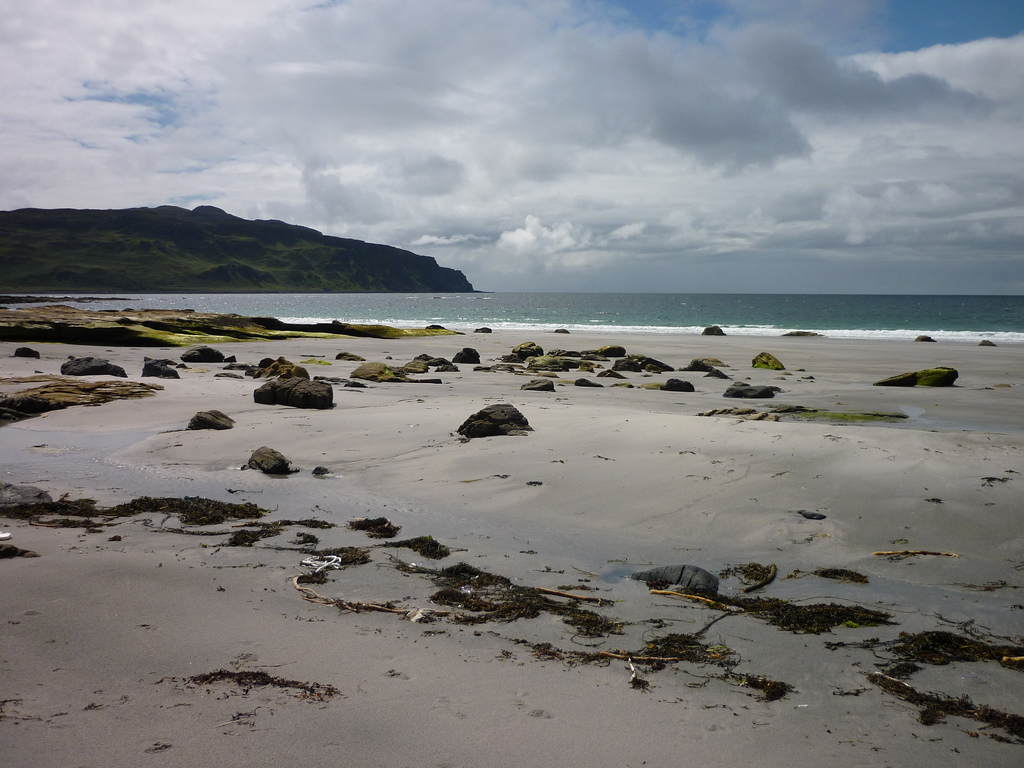 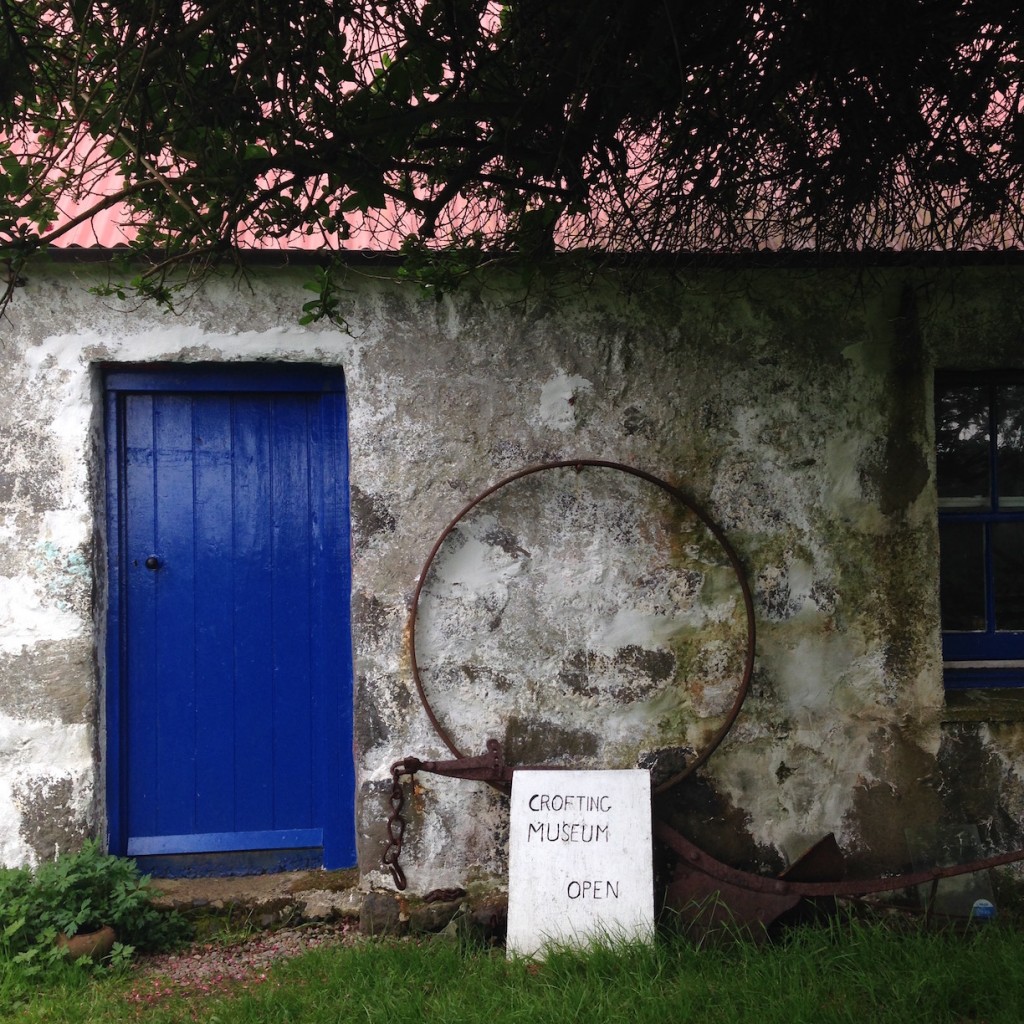 What to do what to see?  Eigg is dominated by “an Sgurr”, a dramatic pitchstone ridge, the largest of its kind in Europe. Laig Bay, a large white Atlantic beach, faces the Cuillins of Rum, one of the most memorable views on the west coast of Scotland. Eigg has the first completely wind, water and sun-powered renewable electricity grid in the world. Best time to visit? All year for stunning views, May and June for birds, July to September for marine mammals, April to October for sunshine (no guarantees though!), September to May for no midges (although with Eigg’s gentle breezes, they’re not too bad, even in June to August), October to March for low winter light and great photographs. BUT PLEASE NOTE – Only residents, contractors or those with a blue badge can bring their car on the ferry to Eigg

In the south there are two famous caves, the Cathedral Cave, which was used for Roman Catholic  services after the ‘Forty-five and the Cave of Francis,  where the MacLeods killed 395 MacDonalds by suffocating them. Massacre Cave, after a small number of rock falls inside the Cave in 2016 The Isle of Eigg Heritage Trust  strongly advises that people do not enter the Massacre cave, but that if they chose to do so, then it is at their own risk. Several reasons are offered for the massacre of the MacDonalds, the most likely one that it followed an incident when some of the  MacLeods staying on the island became too amorous  with local maidens, and were subsequently bound  and cast adrift in the Minch.   With mischief in mind, the MacLeods arrived on  Eigg in the spring of 1577; deep snow covered the  ground (nowadays a rare occurrence on the island).  There was not a soul to be seen, since the populace,  having sighted the invaders, had retired to the cave  whose tiny entrance is shrouded beneath a waterfall.  A strong wind covered their footprints with freshly fallen snow.   After a thorough but fruitless search, the MacLeods set sail again in their galleys, temporarily frustrated in their objective. However a MacDonald climbed on to a promontory to watch their departure and was spotted.  The MacLeods returned and were able to follow his prints back to the cave as it had stopped snowing and the wind had dropped. The MacLeods diverted the stream, piled thatch and roof timbers from nearby crofts at the cave mouth and set it afire, thereby asphyxiating everyone inside.   Several centuries later the bones of those who perished were gathered together and reverently interred.  Only one family escaped the massacre because they had taken refuge in a different cave. The two caves are found a mile to the south of the, pier.  To reach them, take the route up the hill as for the Sgurr.  Then climb the first stile on the left. Continue along a path to a cottage, then by a sheep track to the cliff fence.  Follow down a zig-zag path to the shore, close to a small burn.   On the right is the Cathedral Cave and to the left, the Cave of Francis. Discover 8,000 years of Eigg’s rich and colourful past – Kildonan Graveyard was an early Christian monastery established there by St Donnan c 600 AD.  Or explore what life in a crofthouse was like at the Cleadale Crofting Museum or the exhibition of social history at The Old Shop.

Most of the accommodation on the island is self catering, with one or two B&B’s. So, what to do? Working with MCLEANSCOTLAND you can design a trip to Eigg, in addition to a few other isles, Rhum, Muck, Mull etc. Work with us to decide how long to spend on each isle and what to do, let us do all the hard work or pre booking ferries, stays and activities. I am advising that going to the isles you must be prepared for walking, varied weather and dress uitably. Apart from that, jaw dropping scenery, history, good food and fun are all involved.

Is there somewhere to eat?  Yes, from tearoom to restaurant, home-baking to outside catering

Can I bring a car, camper van or motor bike?  No, island residents only, unless you are a registered disabled person.

Can I hire a bike?  Yes, from Eigg Adventures

Are there midges?  Yes, between late May and early September.