A first in a series of our wee isles.

One wee island in the Inner Hebrides, Tiree is twenty-two miles west of the nearest point on the Scottish mainland, Ardnamurchan. The same latitude as southern Alaska and same longitude as the border between Spain/Portugal,  just over ten miles long, five miles wide and  half a mile at its’ narrowest. With forty miles of coast, much is white beaches of shell sand and the most fertile of the Hebrides. Like most of Scotland’s west coast, the island is cuddled by the warm Gulf Stream. The lack of shelter and its’ beaches make the island a magnet for windsurfers. HISTORIC MENTIONS;  There are examples of early settlement on the island. Over twenty fortresses from the Iron Age survive on Tiree. The best examples of forts on the island can be seen at Dùn na Cleite (fort of the pointed hill) at the end of Happy Valley and at Dùn Shiadair (fort of the shieling) in West Hynish. There are two brochs, Dùn Mòr Bhalla (the big fort of Vaul) is the only pre-historic structure on Tiree that has been properly excavated. The other, Dùn Mòr a’ Chaolais (the big fort of Caolas), stands on the hill above Milton harbour. Columba and his twelve companions who settled on Iona in 563 founded a daughter monastery on Tiree. The final years of the eighth century saw the first raids by the Vikings. Some then began to stay over, 2 graves said to be from the Viking period and neither properly excavated, have been found on the island. During this period a Gaelic speaking (Irish) native population survived alongside new settlers. A new line of half Gael, half Norse mercenary warriors – the Gall-Gaedhil – developed in the Hebrides and many leaders have one parent from either group. In the 1715 uprising the Campbell Duke of Argyll was the leader of the government (Saxons) side which defeated the Earl of Mar’s army at Sherriffmuir. The next year 358 Tiree men were disarmed over two days in Scarinish by the Duke’s men, the overwhelming majority of them Jacobite rebels fighting against the government and, therefore, against the Campbell himself. In the 1745 uprising little had changed on the island. After Bonny Prince Charlie was defeated at Culloden, thirty government soldiers were sent to Tiree. Their leader was commanded “to apprehend the leading rebels and drive their cattle, burn some of their houses“.

The emigration from 1848 to 1852,saw the majority sail to Montreal on board the Barlow, Charlotte, Birman, Onyx and Conrad. In 1849, 600 people left Tiree for Canada. Many of the emigrants were offered grants but the Campbell Duke wielded his big stick and admitted himself to 40 of these evictions. There are still twelve traditional thatched buildings on Tiree, the highest concentration in Scotland. Their design and style of thatching is unique, partly dressed stones laid without mortar in a double wall. Between the two skins is a layer of sand. Walls are six feet thick, deep inset windows and one door. The roof trusses are set onto the inside wall and water runs off the roof, down between the two layers of stone. The material for thatching is muran (grass) which grows on the beach dunes. The muran is laid loose, new thatch applied over the old every two years. Traditionally it was held down with an elaborate design of rope with stone weights, chicken wire or fishing nets are now used.  If you seek peace, space and pure air, Tiree has it all, sky and sea stretch from horizon to horizon, no woodland and only three sizeable hills on a flat landscape, the only sound isthe waves lapping on the white sand beaches. The island – believe it or not – is one of the sunniest places in Britain, with a warm Gulf Stream, winter temperatures are generally higher than on the mainland. To the eas, the mountains of Mull stand out, Rhum and Skye,  in the south Jura, in the north Uist, lie waiting your inspection. 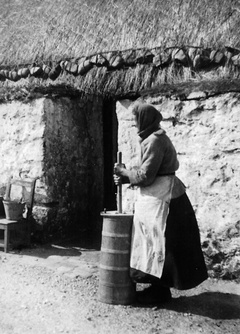 Tiree is not difficult to get to. There are flights from Glasgow and Oban, Calmac runs ferries from Oban. SO WHEN ARE YOU GOING?  Of course the best way to see Tiree – is with MCLEANSCOTLAND!

Fears have been raised over new plans (Oct 2018) to harvest wild kelp on an industrial scale in seas off Scotland’s west coast. The proposal, by Ayr-based firm Marine Biopolymers, would eventually see more than 30,000 tonnes of the seaweed gathered each year by specially adapted boats. The harvesting method involves large toothed devices being trawled through kelp beds, removing entire plants over a certain size. But critics claim the move could damage the marine environment, deplete fish stocks, increase coastal erosion and drive climate change. Our environment can sustain a vibrant Scottish seaweed industry, but allowing mechanical dredging in the way proposed will not only undermine the health of our sea, it will undermine other marine businesses and alternative harvesting methods.